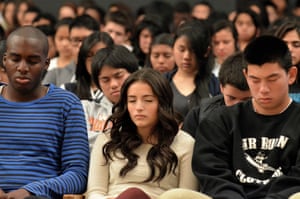 There was a time when Visitacion Valley middle school in San Francisco could have featured in a gritty US crime drama. Surrounded by drugs and gang violence, the kids were stressed out and agitated. One day children came in to find three dead bodies dumped in the schoolyard. “In 2006 there were 38 killings in our neighbourhood,” says Barry O’Driscoll, the school’s head of physical education (PE). He says the lives of students were infected by violence in the community, and several fights would break out every day.

In 2007 a meditation programme called Quiet Time was brought in to meet some of these challenges. “When I first heard about it I thought it probably wasn’t going to work,” says O’Driscoll. “We get thrown a new thing every couple of years so I didn’t put too much faith in it.” But in April, just a month after meditation began, teachers noticed changes in behaviour. “Students seemed happy,” says O’Driscoll. “They worked harder, paid more attention, were easier to teach and the number of fights fell dramatically.”

Keeping Your Emotions in Check

Birth Order May Be Bigger Than You Think

No spam, notifications only about new products, updates.